The Security Line is the #1 Rated Annoyance of Frequent Flyers

According to the trade group for the airlines, Airlines4America, we are in for the busiest summer travel season in history — 257 million people will fly over the summer or 2.8 million a day, that’s 93,000 more people flying daily than 2018.  For the peak period of July 20th to August 10th, 3 million passengers will take to the skies each day which may explain why frequent flyers are yearning for the “airport of the future.”

Americans are in for a long, hot summer of air travel with crowded airports, long security lines and full planes. According to a recent article in Forbes, “travelers certainly may feel the crowds more intensely at the airports they use, most of which have not been able to add as much capacity in a year’s time as have the airlines themselves. Not only could that lead to longer lines and greater frustrations at airport eateries and shops, but, most noticeably, at airports’ security check points.” 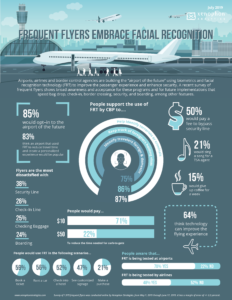 Xenophon Analytics just completed a national survey of frequent flyers to gauge traveler’s opinions on new technology that is appearing in airports across the nation. Specifically, the poll outlined an “airport of the future” that relies on opt-in facial recognition technology allowing passengers to check baggage, check into their flight and board the plane using their face as positive identification. Sixty four percent of respondents said that they believed that technology can improve the flying experience.

Facial recognition technology is already appearing in our nation’s airports. U.S. Customs and Border Protection is conducting a pilot program in 17 international airports for exit and entry of international passengers. The program is designed to positively verify passengers entering and leaving the United States to ensure that imposters don’t fly on a false identity, to monitor visa stays and to look for criminals and terrorists seeking to enter the country.

Eighty-nine percent of respondents registered support for the use of facial recognition to identify criminals and terrorists and 87% supported using the technology to keep track of foreigners holding visas as they enter and leave the U.S.

And airlines are starting to use facial recognition to improve the passenger experience by reducing the time and hassle of going through the airport. Atlanta’s Hartfield Airport is already using facial recognition to speed passengers through international terminal F in a program in conjunction with CBP and the Transportation Security administration.

The Xenophon Analytics poll was conducted in May and June of 2019 and surveyed 1,979 frequent flyers and showed a clear desire from passengers to improve the airport and boarding experience. Eight five percent of those responding to the survey said they would opt-in to an airport-of-the-future utilizing facial recognition with 83% believing that such a program would become popular.

Eight five percent of those responding to the survey said they would opt-in to an airport-of-the-future utilizing facial recognition with 83% believing that such a program would become popular.

When asked about what aspects of travel people most dissatisfying, 38% said the security lines while 26% were unhappy with the check-in process and 24% with boarding the aircraft.

The poll also injected a bit of humor into the often-humorless subject of airport security, asking passengers what they would be willing to do to move more quickly through a security line, the #1 rated annoyance of frequent flyers.

According to the responses, 71 percent of people were willing to pay a $10 fee, 15 percent would give up coffee for a week and 22 percent would embarrass themselves by doing a dance.

71 percent of people were willing to pay a $10 fee, 15 percent would give up coffee for a week and 22 percent would embarrass themselves by doing a dance.

It’s no wonder the lengths travelers would go considering the security line is the #1 rated annoyance for air travelers.

The Xenophon Analytics poll was conducted using the firm’s Frequent Flyer Database which consists of over 200,000 flyers who have opted-in from virtually every media market in the United States. Xenophon Analytics is the research arm of Xenophon Strategies. The firm engages in research for a variety of national and international clients to gauge public opinion. The facial recognition poll was conducted on behalf of NEC Corporation, the world’s leading biometric technology company.